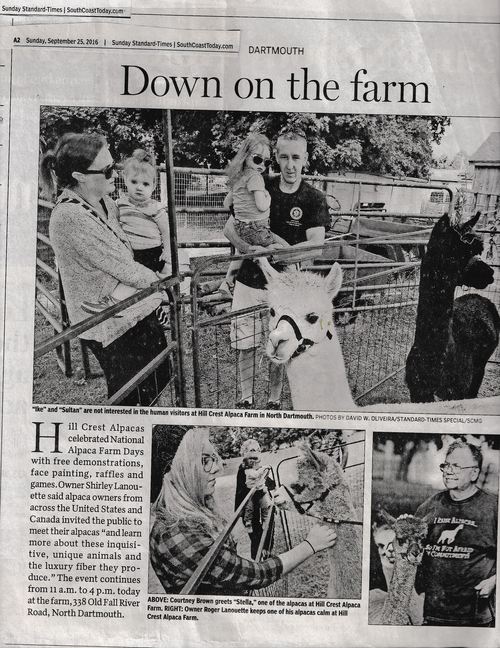 By DIANA MENDES
Posted Aug 15, 2010 at 12:01 AM
DARTMOUTH — Roger Lanouette fell in love while watching an infomercial.
Lanouette was raised in the city without so much as a cat, but about 10 years ago while he was watching TV, an infomercial came on; it was “I Love Alpacas.” For reasons he’s not entirely sure of, “I was just taken,” he said. “I wanted to know more, and the more I learned, the more I loved alpacas.”
Roger’s wife Shirley was also enamored of the animals. The Lanouettes, who today run Hill Crest Alpaca Farm, spent the next three years seeking out New England Alpaca farms, asking questions, reviewing livestock, learning everything they could.
They built shelters and fenced in their 12 acres, placing paddocks and training areas and when all was ready, they chose the best three breed females they could afford and waited for the breeder to tell them they were ready. But when the call came, they told the breeder they still had work to do on the barn and that the fencing wasn’t quite right. Truth was they were scared.
After a few weeks, the breeder called and told them she was bringing the animals down to their farm. When she arrived, she assured the Lanouettes that they were going to do just fine and that she was only a phone call away. “When she left, we stood there looking at the alpacas and the alpacas looked at us,” said Shirley. “Knowing this was it, we jumped in and started to work.” The Lanouettes stressed they are diligent when it comes to the health of their livestock and that shots, worming and diet are the most important features in keeping the alpacas healthy.
Areas of concern include the meningeal worm carried by white tail deer; it can be deadly for alpacas. Alpacas are also highly susceptible to West Nile virus and eastern equine encephalitis, they said. Their herd now numbers 15 and the first cria (baby alpaca) of 2010 arrived the first week of July. By and large, they are hardy animals and do well with the cold harsh winters, but the heat this summer has been hard on them, the Lanouettes said. They explained that the heat can cause undue stress and the barns are equipped with fans and cool water misting systems. “The one thing I never thought of,” said Shirley, “is that after shearing they can get sunburned.” She said they have very fair skin under the fleece so you have to be sure they get shade.
Shearing alpacas is similar to shearing sheep, but they are larger and must be tethered during shearing. The Alpaca Owners and Breeders Association states that the overall quality of fiber is based on fineness, length, and fiber type, among other things.
The baby alpaca fleece is very soft and thin and takes more to make a skein or article to wear. The male’s fleece can be coarser then females and the colors range from white to black. The adult yield is approximately nine pounds of fleece with the baby around five pounds.
Shirley said spinning was difficult at first. “It took a while to get the rhythm of pumping feet and pulling down the fleece,” she said. “It is an art form but after a few months of practice, I really got the hang of it.”
This past year, Hill Crest has been working with local schools to set up an educational program to fit in with the curriculum, in areas including the origin of the alpaca, agriculture and the history of textiles. The Lanouettes also offer educational tours to homeschooling groups and others in the area.
According to the Alpaca Owners and Breeders Assocaition website, www.alpacainfo.com, alpacas were important domestic animals in the ancient Incan civilization and played a key role in the Incan culture in South America.
Alpacas were first imported to the United States in 1984, the association says. Adult alpacas are about 36? tall at the withers and generally weigh between 100 and 200 pounds. The lifespan of the alpaca is about 20 years.